In 1931, Archie Waugh Straiton (1907–2000), earned an MA in physics with a thesis entitled, Measurement of the Propagation Characteristic of Electric Wave Filters. In 1939, he earned a PhD in physics. His dissertation, supervised by Professor S. Leroy Brown, was entitled, Solution of analytic and differential equations by harmonic processes. Straiton later joined the electrical engineering department and became chairman.

Archie married Esther McDonald on December 28, 1932. Esther was born in 1909, in Azle, Tarrant, Texas to William Newton and Maude Hillard Bailey McDonald. Esther graduated from the University of Texas in 1930 with a degree in English. Esther and Archie had two daughters, Janelle and Carolyn. Esther died on October 22, 1983, in Williamson County, Texas.

Photo above is from 1930 UT yearbook, The Cactus. At right is a high school photo, school unknown.

Memorial Resolution,
University of Texas at Austin
(with some additions by Mel Oakes)

He received a BS in electrical engineering and an MS in physics from The University of Texas at Austin in1929 and 1931, respectively. He then took a teaching job at Texas A&I College in Kingsville, where he remained for four years. He returned to UT Austin to continue his graduate study and received a PhD in physics in 1939. (His thesis was entitled, "The Solution of Differential and Analytic Equations by Harmonic Processes" and was supervised by Professor S. Leroy Brown. )

In 1943, Dr. Straiton joined the faculty of the Department of Electrical Engineering at UT Austin, where he had a distinguished career as teacher, researcher, and administrator. In 1945, he founded the Electrical Engineering Research Laboratory at the Balcones (now Pickle) Research Center and served as its director until 1970. Over the years, the center provided the facilities for the funded research activities of many UT faculty, and many undergraduate and graduate students.

Dr. Straiton was a pioneer in the study of how radio waves interact with various constituent gasses of the earth’s atmosphere. His measurements of the absorption of millimeter wave signals by oxygen and water vapor are still considered to be the definitive database for the field of millimeter wave propagation. These studies also led to the development of specialized instruments that were used for both local and remote sensing of the micrometeorological properties of the atmosphere itself. Data obtained from these instruments provided a better understanding of the dynamics of the wind, temperature, and humidity in the atmosphere. Professor Straiton regularly published the results of his research findings and was author or coauthor of well over 100 technical articles.

Dr. Straiton was also responsible for the design and construction of a 16-foot parabolic antenna with reflector surface tolerances so small that it could operate effectively as a radio telescope at millimeter wave frequencies. At the time it was constructed, this antenna had the largest ratio of aperture diameter to surface tolerance of any radio telescope in the world. In addition to being used to map the radiation profiles of the sun and planets in our solar system, the telescope was used at the McDonald Observatory site by radio astronomers from all over the world in the discovery of many new millimeter radio wave sources throughout the universe.

Dr. Straiton’s achievements as both a researcher and an educator received national recognition when he was elected to membership in the National Academy of Engineering. (His National Academy recognition came in 1976. At that time it was noted that Dr. Straiton had supervised more that 63 master's theses and 27 PhD dissertations and was the author of more than 100 technical articles in professional journals. He served as a U. S. delegate to seven general assemblies of the International Scientific Radio Union.—Mel Oakes) This was followed by his receiving the prestigious Edison Medal from the Institute of Electrical and Electronic Engineers (IEEE), a professional organization of which he was also named a Fellow. The citation for the Edison Medal reads “for an outstanding career in electrical engineering with significant contributions in the field of radio propagation and astronomy, and in engineering education.” At the University he received a Presidential Citation and was named a Distinguished Engineering Graduate.

Dr. Straiton was an outstanding teacher at both the undergraduate and graduate levels. During his tenure on the faculty, many, if not most, of the graduate students in electrical engineering took his popular course on electromagnetic theory. He was extremely active in graduate student supervision. At the time of his retirement, he had supervised more graduate students than any other faculty member in the department. His teaching accomplishments were recognized by the University when he received a lifetime teaching excellence award.

Dr. Straiton gave unselfishly of his time to the University, the community, and his profession. He served as chair of the Department of Electrical Engineering, and was acting vice president and dean of the Graduate School from 1972 to 1974. He served on numerous committees and advisory boards of the IEEE and other organizations, including the National Bureau of Standards and NASA. He was also a member of the board of directors of Southwest Research Institute in San Antonio. In the community, he served as chairman of Austin’s Energy Conservation Commission. He was an active member of the University Area Kiwanis Club and served a term as its president. Following his retirement he became an active member and participant in LAMP, the acronym for “Learning Activities for Mature People.”

Over the years, Dr. Straiton made substantial monetary donations to the University. Following the 1983 death of his wife, Esther, Dr. Straiton made a donation to establish an endowed presidential scholarship in her memory. Several years later, he donated funds to establish a second endowed presidential scholarship in memory of his close associate and research partner, Charles W. Tolbert. He also made donations to the Department of Electrical and Computer Engineering.

Dr. Straiton was a humble and caring man. He cared for his students, his faculty colleagues, and his family. He was always calm and seemed never outwardly bothered by any situation. He never raised his voice or said a bad word about anyone. He gave with his whole heart, and he did not expect anything in return; he was the perfect example of a kind gentleman. He will be greatly missed. At the time of his death, he was survived by his two daughters, Janelle and Carolyn, and their husbands, six grandchildren, and ten great-grandchildren.

Biography associated with his receiving the Edison Medal 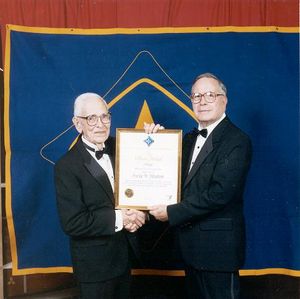 At right, Archie W. Straiton receiving the 1990 Edison Medal from IEEE president Carlton Bayless. The IEEE Edison Medal is presented by the Institute of Electrical and Electronics Engineers (IEEE) "for a career of meritorious achievement in electrical science, electrical engineering or the electrical arts." It is the oldest and most coveted medal in this field of engineering in the United States.[1] The award consists of a gold medal, bronze replica, small gold replica, certificate and honorarium. The medal may only be awarded to a new leap/breakthrough in the technological area of science.

In 1945, Straiton helped establish the Electrical Engineering Research Laboratory within the University and was its Director from 1947 to 1972. This organization conducted research on many aspects of the propagation of radio waves through the atmosphere including horizon and vertical refraction of microwaves, sea surface ducting, television coverage, atmospheric refractometry and geo-magnetics.

In 1951, he and Charles W. Tolbert started a comprehensive study of the transmission characteristics of millimeter radio waves. They measured atmospheric attenuation from eight millimeters to one millimeter (as sources could be obtained or improvised) in the laboratory and over a wide variety of outdoor paths including transmission from Pikes Peak to Mount Evans in Colorado. Measurement of the radiation from the sun, moon, planets and satellites revealed transmission properties of the entire atmosphere and provided data on some of the components of the solar system. One of high precision antenna systems permitted the reception of the first intercontinental microwave moon bounce from Malvern, England in 1958. A five-meter parabolic antenna system was later used extensively by astronomers for the measurement of interstellar gases.

Straiton received the Presidential Citation from The University of Texas in 1982 and the Distinguished Engineering Graduate Award in 1984. He was Regional Director of the Institute of Radio Engineers in 1953 and 1954. He was a three-term member of the USA National Committee of the International Radio Engineers and was Chairman of its Commission 11 for one three-year term. He attended seven URSI International Conventions as a USA delegate. He is a Fellow of the Institute of Electrical and Electronic Engineers and a member of the National Academy of Engineering. He was awarded the IEEE Edison Medal in 1990 "For an outstanding career in electrical engineering with significant contributions in the fields of radio propagation and astronomy, and in engineering education."

He married Esther McDonald in 1932.  They had two daughters, Janelle Holman and Carolyn Erlinger, six grandchildren and three great grandchildren. Straiton passed away on 22 July 2000.